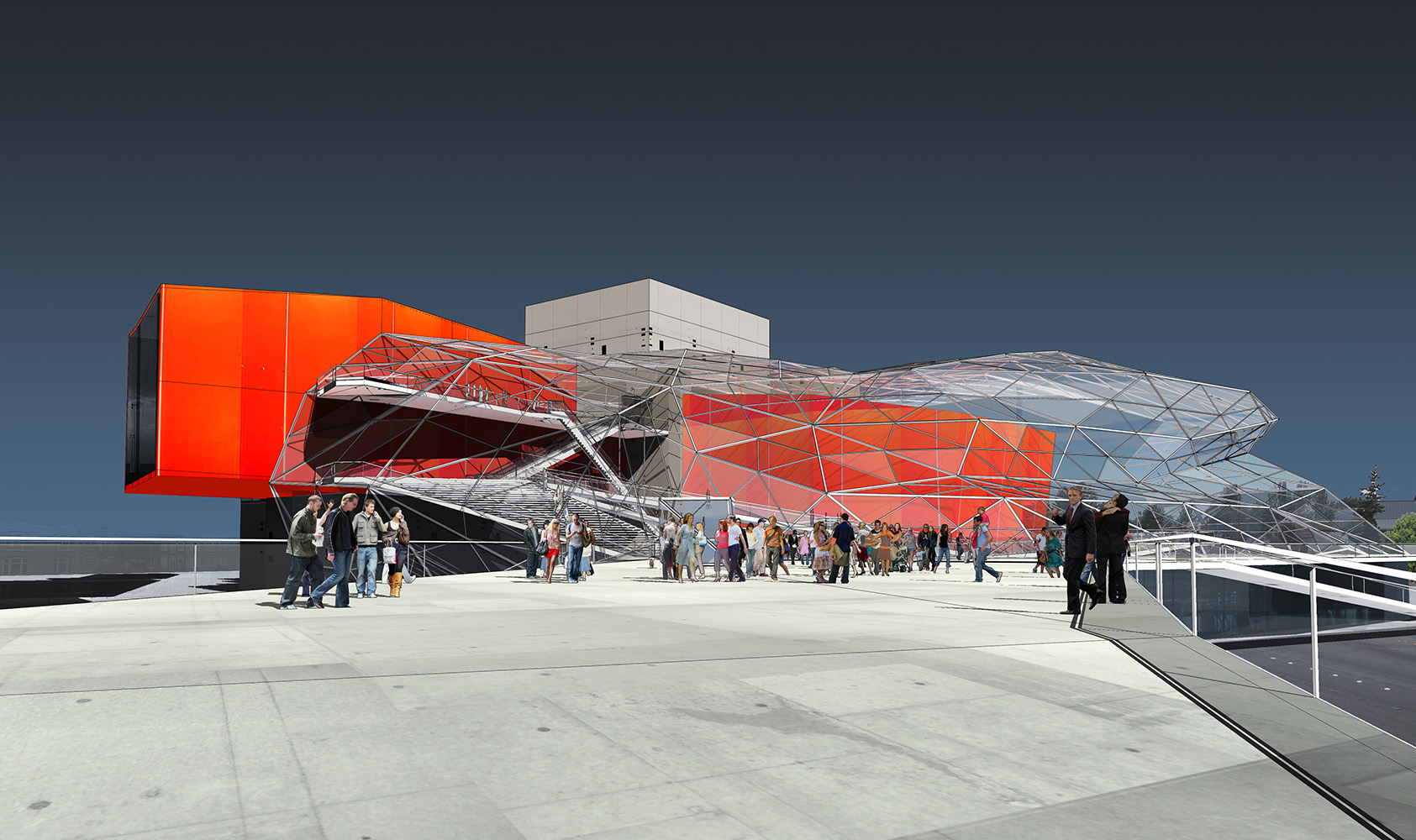 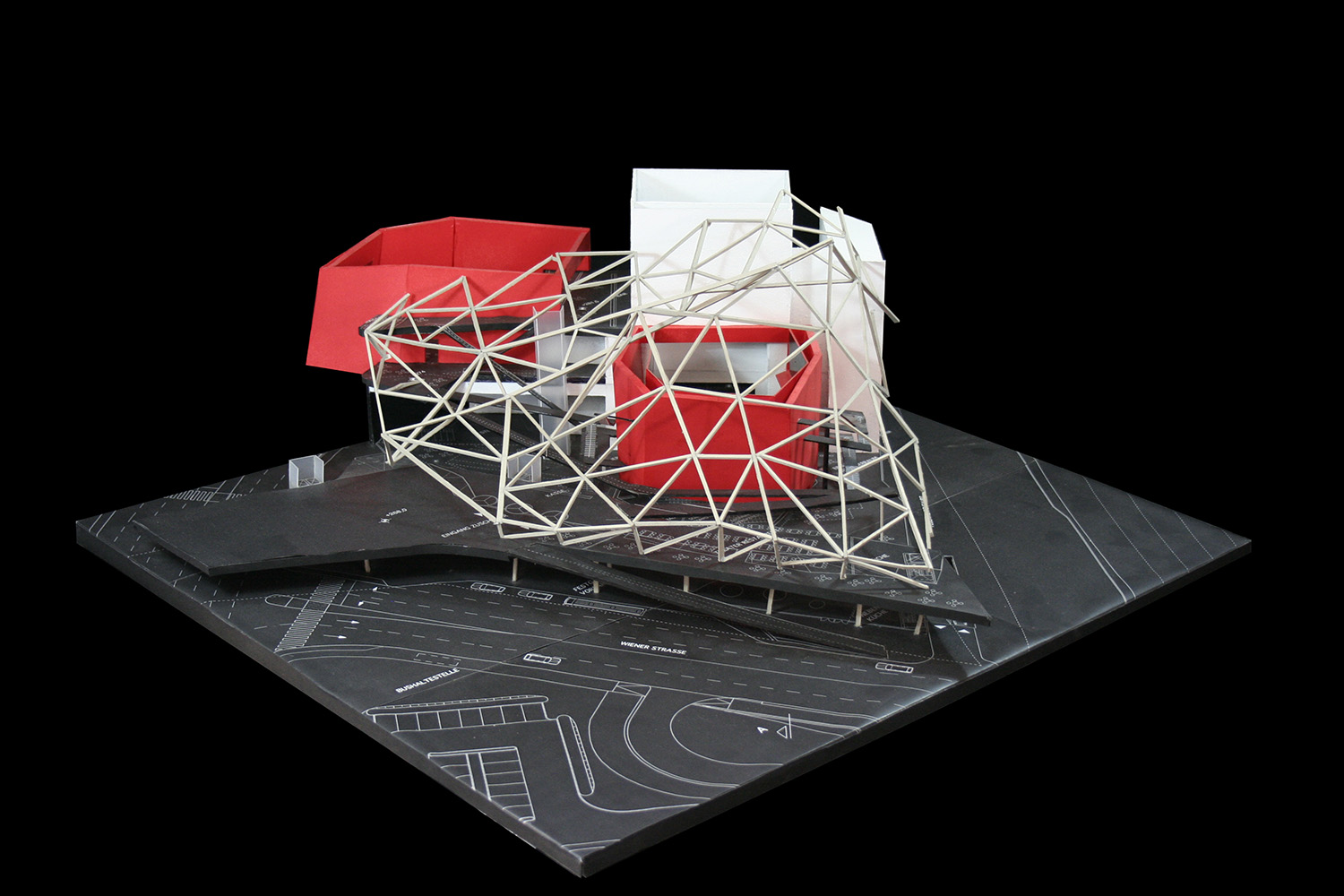 The broad outlines and the founding principles of the “Musiktheater” project have been established in consideration of the complexity of functional constraints in an urban setting.

In terms of urban planning, our project is committed to providing a wide variety of contacts with the urban environment, whilst creating the necessary symbolic impact of a large-scale public building in the town.

The lateral facades of the Musiktheater are adapted to their surroundings, whilst reflecting the functional organization of the building. The workshops and rehearsal rooms are arranged on the town side, along the Blumauerstrasse, in a succession of divided and longitudinally staggered units, which match the fragmented pattern of facades on the other side of the road.

Along the railway tracks, in a completely linear façade, dressing rooms and offices are stacked one above the other behind the shelter of a double-glazed façade, providing both acoustic and thermal insulation. Punctuated solely by roof gardens and vertical access shafts, its horizontal lines vibrate constantly in response to the random interplay of its coloured interior blinds.

On the town square, approach and park side, the foyer reaches out to encompass the space of the concert hall and presents an expansive face to the town, with a multiplicity of pathways housed under a glass vault. Spanning the crossroads in a dynamic arrangement, the walkway resolves and consolidates traffic flows from various directions, including the station, the town centre and the edges of town. At the same time, this facility provides a point of transition, rising progressively above the traffic and providing spectators with the distance required to prepare themselves for the collective listening and viewing experience of the theatre. All major architectural works which are dedicated to lyrical and musical spectacle have consistently incorporated a vertical elevation at the entranceway, in order to escape the urban clamour below. In this case, however, the walkway not only spans the crossroads but flanks the entire facade of the foyer, providing a new urban space for both spectators and the town itself. Above and below, as ancillary businesses, restaurants, shops, etc. are opened, the urban space is enlivened at two levels. Easy communication with the park provides a further embellishment to this new facility in the town, and lends it a further significance: the esplanade, the square, the walkway, ramps and stairways all combine to create a space which is consistently vibrant and always in sympathy with the surrounding urban spaces.

This theme is taken up in the foyer by a further series of ramps, walkways and stairways, in this case for the distribution and direction of the lively flow of traffic to the various rooms and performing spaces. The foyer also provides a space to stroll before the performance begins, during the interval or after the show. At night time, the interplay of lights between the foyer and the square/walkway will transform the Musiktheater into a magic lantern for the town.

The auditorium and the stage have been designed in strict accordance with the principles described in the programme, notwithstanding the severe constraints and the extreme confinement of the site, which have forced choices to be made. Decisions have been based upon a detailed survey, involving the inspection of various major European facilities of recent decades. Choices have consistently been made in consideration of the maintenance of functional, direct and rapid links between the various parties involved, and in consideration of the succession of scenes during a presentation, like the succession of programmes itself which will ensure the effective operation and long-term presence of the Musiktheater.